I've been on a bloggy break of sorts. And it's not quite over, but I wanted to go ahead and do this post while it was still "somewhat" fresh news!

Our vacation started out pretty interesting :) Daniel was on call the whole week before our vacation, which happened to cover the weekend that we got a rare winter snow storm!! It was so pretty! And exciting! It started late Friday afternoon, and it took Daniel 2 hours to come home from his last call, which would have normally been a 35-40 minute drive. Shortly before he was finally home, we'd already had 9" accumulate in the ~4 hours it had been snowing. 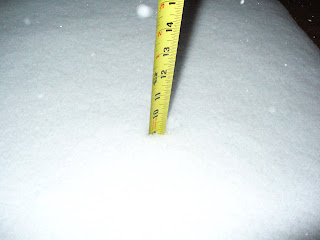 It snowed all Saturday, and while he received several pages, he wasn't able to go anywhere because of the road conditions. Many of the calls were what we call "people looking for somebody to talk to." Anyway, the snow stopped falling sometime Saturday night/Sunday morning, and we had between 15-18" of it on the ground! It was sooo pretty :)

Sunday afternoon while Daniel was out carefully taking care of the few calls that he did need to go on, I ventured out and took some pictures. 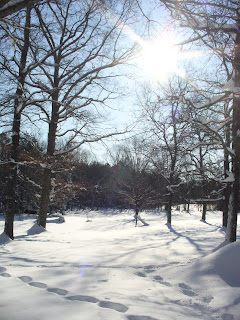 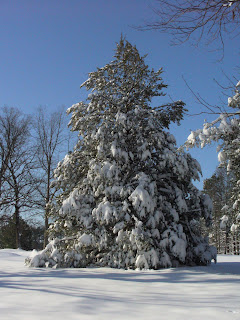 Before Daniel went anywhere in his work van, he took his truck to go check on the road conditions. Our road was still pretty bad, but the main road (about 1 mile from here) was in fine shape. When he got back from checking the roads, he parked his truck in the front yard in the event we would need to get out, we wouldn't have to fight the slight incline in our driveway. The snow was level with the floorboard of his truck! 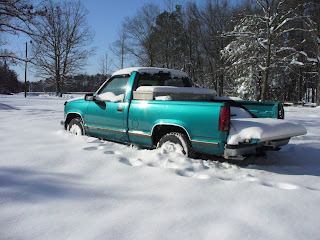 The road that goes past our house... this was after the plow had been through - there was still quite a bit of snow pack and ice, I had to tread carefully! 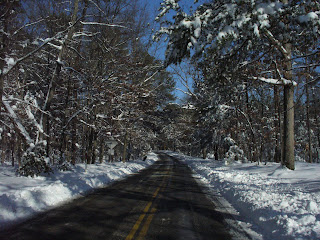 Our place from the road, all snuggled in under a blanket of snow :) The house is framed by the two cedar trees. 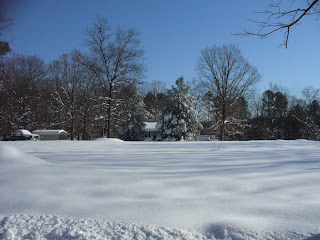 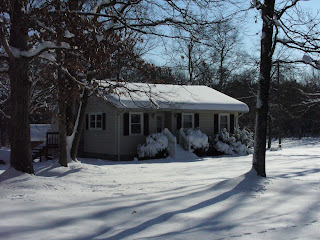 Rascal hung out in his dog house for a while, then spent plenty of time romping around the snow, even sleeping in it! 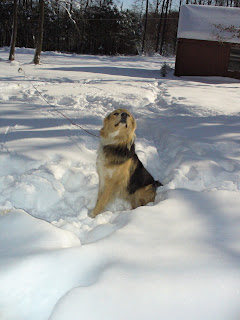 The undisturbed snow was very dry, so it was very light. I shoveled off the back steps and sort of swept off the car. This picture kind of shows how much snow we got. We got a LOT of snow!! 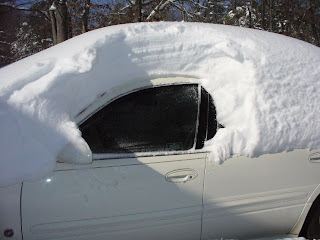 Christmas Day, Daniel took this picture of the snow that had been sliding/hanging off our shed roof. By evening the big hangover had fallen off. It was hanging off by a good 3-4 feet. 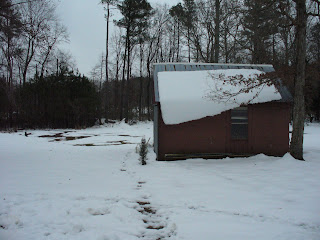 We had a really nice vacation. We enjoyed sleeping in, hanging out, not doing much, eating special munchy foods that I'd gotten for the occasion, and just doing alot of whatever we felt like at the moment. Some of the time Daniel spent watching TV and playing with the cats. Here he is with Chubby, who was intently watching a nature show about animals on PBS. We also had fun watching our cats entertaining themselves. I realize that before too long we won't have to rely on animals for entertainment, we'll have a little human being to fully occupy our attention!! The cats are fun to watch, though :)

Here they are playing in the Goldfish box. Jeffy is in the box with his tail stuck out the hole that I cut in the back. 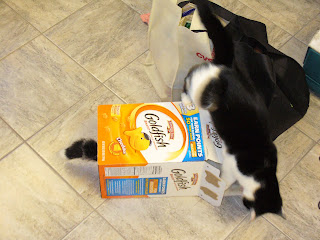 One afternoon he repeately crawled through the Pepsi box, stopping mid-way to play and wrestle with Chubby. Then he'd wiggle out, and go right back through again. It was funny to watch :) 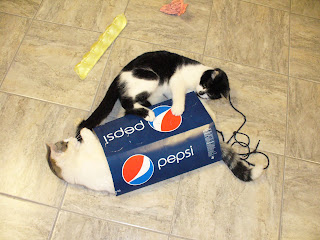 We had a really great vacation, and I'm really glad we decided to take it the week of Christmas. I think this Christmas was perhaps the best, most relaxing one we've had in a very long time.

9 inches of snow in 4 hours....wow! I love when the sun comes out after snow, it makes it even more pretty. Your dog is so cute, can't believe he(or she?) could sleep in such deep snow! lol

Oh, those cats! If you provide "toys" for your cats and enjoy them so much, I can only imagine how wonderful of a childhood your children will have. (Can I go back in time and be your child? Hmmm...then again, do I really want to?)

I love the snow pictures! They are beautimous! And I was highly entertained by you kitties' antics. Chubby is a great name for a cat.