Susannah (still in her "lifesaver pajamas") and Sylvia
doing "school". 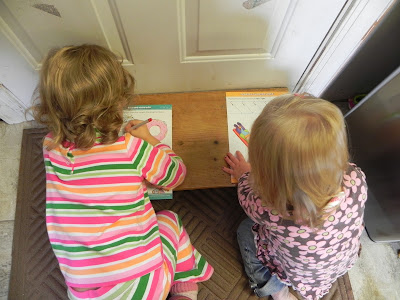 I am thinking... about my mom-friends. One friend going through chemo at the age of 30. One friend with a few-week-old and a 2 year old who is just tired. One friend who's baby will only drink from a bottle so she faithfully pumps day in and day out so he can get the "good stuff"; pumping is exhausting in itself. I'm not currently in any of those stages or shoes, but I am familiar with just. being. tired. So I am thinking of them and praying for them today. Thinking of how I might be able to lend a helping hand. If you know a mother of young(-er) children, why not find a way to be an encouragement today? Just something simple. It makes a difference to know somebody cares.

I am thankful for... our MOPS group. Where we can "let our hair down" and share, laugh, cry, encourage, learn and lean on each other.
I'm also thankful for our woodpile. This week is forecast to turn chilly and it is so nice to be able to heat our house for "free".

From my kitchen... I made Rosemary Peasant Bread on Saturday. I have a bowl of picked turkey in the fridge from a turkey that had been buried in the depths of the freezer. At least some of it will be something pot-pie-like for dinner tonight. I am enjoying my {almost completely} purged kitchen. I rearranged a few things so there is less on my countertops and I am LOVING the cleared spaces! 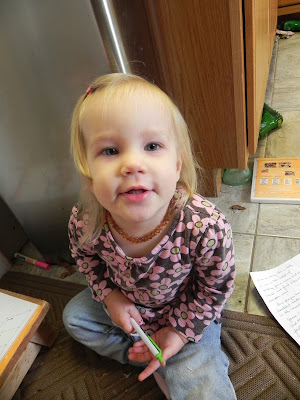 I am reading... Tender Mercy for a Mother's Soul by Angela Thomas. Lots of children's books. :) Looking through Daniel's "This Old House" magazines over and over, looking for inspiration and ideas.

I am hoping... for a really great week this week. It has started of well and I am praying that it keeps going that way. Daniel is on call this week on top of it turning cold so there is potential for many single-parent days ahead of me. Grace, strength and wisdom.
I would also like to FINISH the kitchen-purging project. I don't think the remainder will take long to do and I'm ready to be done so I can move on to another area AND so I can enjoy my purged kitchen to the fullest. :)

I am creating... Saturday (or Friday?) the sewing bug bit me and I made two diapers for Susannah's baby doll. They will be for Christmas gifts. I want to make some more out of different patterned fabric. I don't have any velcro so I need to get some of that to completely finish any diapers I make. I was very happy with how the two I did get made turned out since I was just eye-balling and made the pattern on the spur of the moment. 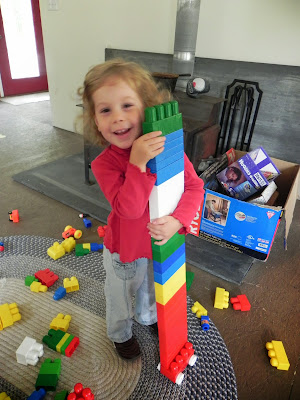 I am hearing... silence. The girls are napping and my own eyelids are heavy.  I may need to get a power-nap next.

Around the house... I am way behind on folding the clean laundry. I ended up pushing pause on this post yesterday and took a nap. Now to finish it!! Daniel replaced the broken toilet seats I mentioned in the last post. The girls and I took our almost-daily jaunt outside after lunch and I brought in a wheelbarrow load of wood. The low tonight is supposed to be 25° so I'm sure we will use it. I have been enjoying burning a candle most days. Anyone have a good suggestion for where I could find nice-smelling candles affordably?

A few plans for the week... Stay warm. ;) Get caught up with all the laundry. Finish the kitchen project like I mentioned earlier. Maybe get to a store to buy some velcro so I can continue on with sewing the diapers for Susannah's doll. Stay sane if Daniel is gone all day, every day.


Watching the berries in the wheat grinder. 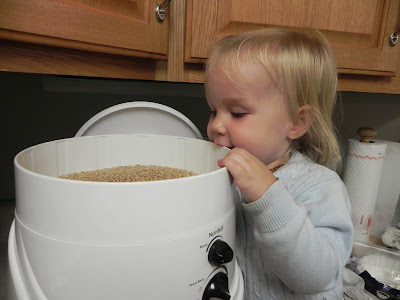 Several weeks ago I stumbled across a new blog, Organizing Homelife. I don't even remember now how I found it, but find it I did and wow! I didn't turn back. When I started reading the blog she was in the middle of her October series, 31 Days to Organize Your Kitchen Frugally. Since I was in the midst of a major bug-bite from the Purge The Kitchen bug, this was a fantastic find.

What I thought was going to be a week-long project of purging and organizing the kitchen has turned into a several-week-long project. Being pregnant (and feeling more pregnant every day it seems) and having 2 little girls to keep occupied or have as "helpers" means I don't have the energy or time to get things done as fast as I think I will sometimes. I have purged and purged. My yard-sale pile has grown. I threw out several plastic containers and a bazillion plastic lids that I no longer had containers for. Things that I didn't really want to store in my kitchen anyway went into a box until I figure out a new home for it. Just get it OUT of the kitchen so I can have less stuff and more space either for better storage of things I actually use or just to not have cupboards quite so crowded. Less is definitely more.

One of the cupboards that has been irking me has been my cookbook and stereo cupboard (the stereo in my kitchen was a Mother's Day gift 2 years ago). I gave my cookbooks a serious purging quite a while ago, but my CD storage has been a growing source of annoyance. On Monday I decided it was time to tackle this space.


Before. Wait, the cat's flea medicine doesn't need to be in here! 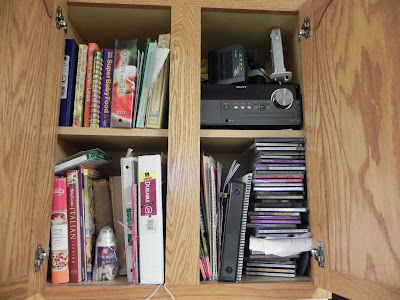 Another area of the cupboard I really wanted to improve was my magazine holder for a few loose recipes and a few Taste of Home magazines that I haven't clipped from yet. I have been using a cut-down box but it was gaping and just overall something I wanted to change.


Before, again.
Hello "I want to play the  CD in the middle" night-mare!
(The make-shift cereal box "magazine" holder is hiding on the left.) 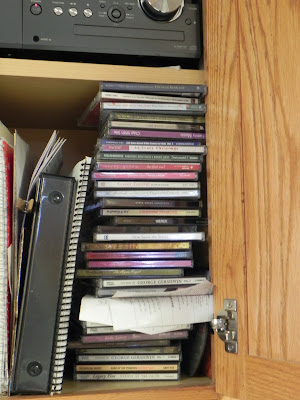 I have been thinking for a while about how to store my CDs more efficiently both space- and accessibility-wise. After rolling the idea of "something smaller" around in my head I realized that something like a CD wallet would be the perfect solution.  Yesterday morning we ran some errands and found what I hope is a great solution. It wasn't exactly what I had in mind (I was looking for something more like this), but I wanted it "now" and didn't want to go to several stores searching. What we did get were these 3-ring binder inserts. Since I don't keep a lot of CDs in that cabinet anyway, a slim 1" ring binder will work great and take up even less space than a CD wallet like I thought I originally wanted. I didn't even have to buy a ring binder because I already had one here at home waiting to be put to good use. Win-win! Over nap-time I worked on the change-over and I am really excited to have easier - and less hazardous - access to my CDs. Even more than that, I'm excited to have a less crowded cabinet! Less is more. :)


After. I removed the cat medicine and decided that appliance
manuals would be better stored in the file cabinet. 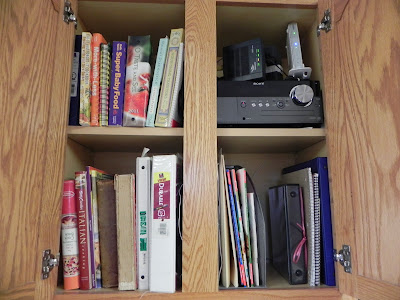 To improve the make-shift magazine holder situation, I remembered that we had a real magazine holder that wasn't in current use. It helps the cupboard have a much neater look and I don't have to worry about the sides sagging open any more. When making this change-over I did purge some recipes that I realistically wasn't going to try and generally neatened up the space.

After, zoomed in.
On the left of the CD notebook are our church
and Sunday School Directories,
my Thankful Journal, and my notebook for
writing down ideas, lists, projects, and so on. 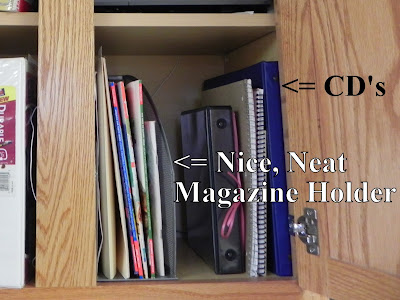 The other great purchase we made yesterday that I hope will make my life easier and more clutter-free was a 13 pocket expanding file folder. I have come to realize that our file cabinet just doesn't work for me. Rather, I don't make it work for me because I don't want to. Obviously if I prefer to put the receipts and paid bills in a pile somewhere instead of filing them, the file cabinet is not the answer to my, er, problem. "Hi, my name is Miriam and I have a problem..." 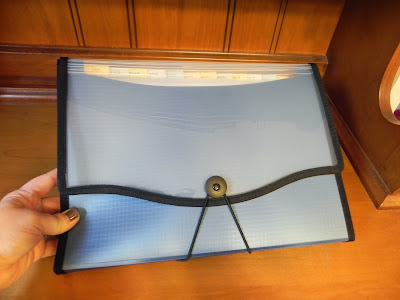 Inspired by this post on Organizing Homelife I think I have a simple, easy-to-use, HANDY way to take care of bills, receipts, stubs and all that other "stuff" that usually goes into my pile-file. I am going to try sorting simply by month. All paperwork from each month will go into that month's pocket. At the end of the year I will empty it, probably into a manilla folder, and stick it in the attic with the other paperwork we keep. Rarely do I have to go back and find a bill or receipt so it think this will work fine. If I feel the file-by-month method is a little too unorganized I still think the expanding file will work well as a simplified categorical miniature filing system.


No "before" pictures but already I am finding this SO easy to use! 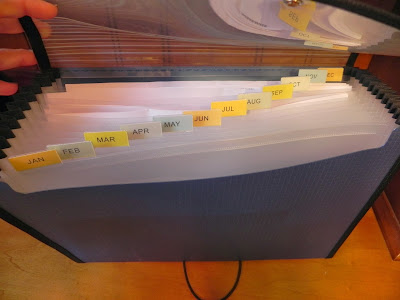 It has been fun sharing these ideas and improvements with you.  I hope you've enjoyed reading this post and perhaps even been inspired to create some organized space in your home. Have you had any great organizational or purging light-bulb moments lately? Did you actually do something about it? I'd love to hear about your experiences in the comments below.