A Week For History Books!

Oh, what an exciting week it has been!!

Tuesday afternoon I put Susannah down for her nap, then went into the laundry room to start a load of laundry. I pulled the knob to start the washer, and was pouring the soap in when it felt like the washing machine was spinning out, out of control! Amid loud rumbling, I immediately realized it COULDN'T be the washing machine... the dishwasher was running, but it doesn't spin out!... had the pressure tank under the house exploded? That all went through my head in a split second. I hit the knob to turn the washing machine off, and when the shaking was continuing and the loud rumbling kept rumbling, I realized we were having an earthquake!

I could hear jars rattling, and my first thought was that all my newly canned jars on the pantry shelves were going to crash to the floor and burst and all that hard work was going to be wasted. Then I realized there was nothing I could do about that and dashed into Susannah's room to be with her. She looked a little puzzled, but that was about it.

The quaking lasted about 20-30 seconds, but my heart didn't stop pounding for about an hour. A quick phone call to my mother-in-law confirmed that it had indeed been an earthquake (I had cut the TV on, but it was too soon for any breaking news to be going up). Then the phone service went dead for a while.

I was finally able to get through to Daniel, who was about 30 minutes east of here, and he was like "yeah, I felt it too". I still didn't know where the epicenter was, but when I found out and told Daniel he said "no wonder you were so freaked out!" - because it was about 20-25 miles from us as the crow flies (actually 400 yards behind the house of family in our church!) and about 45 miles from where he was at the time. If you watch the news at all, you probably know it was a 5.8 (or 5.9, depending on who you talk to) earthquake.

There was no damage here immediately around us, other than me feeling like I needed some heart pills :) We heard a few aftershocks and felt one that was a 4.8 in the middle of the night that night. Of course, now every time I hear low-toned rumbling I immediately wonder "earthquake?" Log trucks rumble by here frequently, so rumbling isn't a completely unusual sound to hear.

That was very exciting. But, then we had Hurricane Irene coming our way!!

We are far enough in-land that we were out of any big danger, but our county was under a "Hurricane Watch". Friday evening the first bands of rain reached us, and it started drizzling steadily Saturday morning. About 3pm in the afternoon the power went out for good after blinking and "browning out" several times, and it did get pretty windy at times. Again, no damage immediately around us, praise the Lord! We have a lot of trees on our property and I was hoping they all had nice deep roots and strong trunks!

We had leftover pizza for supper Saturday, but when I was ravenously hungry about 9, we broke out our gas camp stove and made fried taters (what I was in the mood for). We did have windows and a door open for ventilation, since these are not to be used in a closed area. This morning I made pancakes, bacon and eggs on the stove, we had sandwiches for lunch, and for dinner I cooked up an Italian one-pot meal of Risotto with Chicken (Rice with Chicken, and I threw in green beans for a vegetable). While the camp stove has it's inconveniences, I quickly realized how much more I like cooking on gas instead of electric. 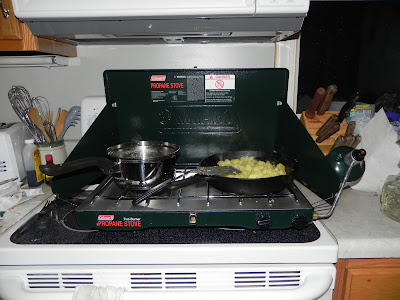 Our power was out for roughly 27 hours. We do have a generator that we were able to run the refrigerator and 2 chest freezers on, and we could also charge our phones and run the toaster as needed. But using candles and oil lamps for light, and jugs of water for toilet flushing... well, it's just not as convenient :)

I am looking forward (sorta) to tomorrow when I can run the dishwasher and do laundry again :)

This has been a week I'll not forget for a long time. The hurricane wasn't a huge deal, but the earthquake - being the first I've experienced - certainly was!!

Now I am looking through my post labels and wondering which one is "earthquake" and "hurricane" relevant! I think I need a new one, but what to call it?

We are very excited to announce to the bloggy world that we're going to have another baby!! 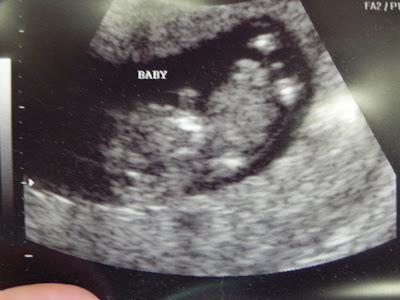 "Baby Gus" is due to arrive late February/early March of 2012.

I'm feeling fine most of the time. More tired, and occasionally my stomach feels "off", but overall mostly normal. And pregnant :)

For a couple weeks I felt absolutely awful. Then we figured out the prenatal vitamins were the cause, so I've been off those (with the Dr's blessing) and will try again in a few weeks when the 1st trimester changes should be leveled out.

Oh yes, we did want this baby, he or she was not a surprise :) We were pleasantly surprised to find out from the first ultrasound that we were 2 weeks further along than we thought.

We got to hear the heartbeat at the 12 week appointment :) Daniel was able to be there and it was very special.

Susannah will turn 2 very soon after the baby is born, unless this baby holds out for a couple weeks overdue! So I guess in all reality we'll have "2 under 2" for a tiny bit :)

We are calling the baby "Baby Gus" but that is only a nickname for now (Susannah was "Baby George").

There is a slim chance that there may be some tomatoes out on the tomato twigs that are still good that I may can, but that will be small potatoes compared to the past 2 weeks.

The entire house is about to fall down around my ears (or pile up around them, one or the other!), but I made it.

I'm so relieved to have it done. I can't wait to get my house back into some semblance of routine and order. I know Daniel and Susannah will be happy to have "me" back, too :)

I'm also eager to get back to blogging a little more regularly. I also need to find my camera cord that is somewhere in this house... I've been able to keep up with reading blogs for the most part, but my brain power just hasn't been enough to lend some to blogging, too :)

I am so excited to wake up tomorrow, er, later this morning and know that I don't have do CANNING tomorrow! Yippee!!!! And I won't have to stay up late waiting for canner timers to go off so I can crawl in bed.

I know I've been sparse here lately... I had a comment waiting for me this evening wondering where I'm at :) Not blogging very much, that's for sure! It hasn't been for lack of blogging fodder, I just haven't had time or energy.

The garden is about ka-put for the season. Except for the corn, it looks like a bunch of twigs. Oh, the peppers are still hanging on, and I need to go pick them again - maybe tomorrow. I think I'll pick the tomatoes one more time (tomorrow) and that will be it. They are pretty much toast. I haven't gotten nearly as many tomatoes canned as I wanted, but some is better than none.

The 1st planting of corn had a nice 1st picking, but the 2nd set of ears were not worth it. I'm hoping the 2nd planting will produce nicely - I only have 4 qt. in the freezer so far! I'm debating buying corn to freeze, but I have a full plate already and cannot handle corn at the moment.

Remember the post about Daniel's work having slowed down? That was for one week. Since then, until this week, he has been leaving the house between 7 and 7:30 in the mornings and not getting home until usually around or after 9, sometimes as "early" as 8 or 8:30. This week the weather is a smidge cooler and he's been home before dark both days so far! He's also on call this week, so there's no guarantee that once he's home he won't have to go back out, but so far so good :)

My days have been full of parenting and canning/freezing what produce we do get. On a typical day I spend the morning doing housework (dishes, laundry) and the afternoon working on getting tomatoes or apples ready to can, and then run the canner in the evening. Last week I did tomatoes and salsa. On Friday I went and picked up 4 bushel of apples that I had ordered from an orchard, and every day but Sunday I've loaded both crockpots and a stock pot full in the mornings, and then Daniel and I run them through the Squeezo in the evenings.

I did buy a steam canner this summer, and since I've figured out how to make it work on my glass top stove, it IS faster than waiting for the whole waterbath pot to heat up. I'm sure I'll especially like in in another week or so when I'll be getting 4 bushel of peaches to can!! I imagine I'll have the steam canner AND waterbath canner going if I can keep the jars filled and ready.

If you haven't seen it already, over on my side bar to the right I have been listing, just for fun, what I've been canning and freezing this year. All of the fruit I bought, but all the vegetables are from our garden.

So I am still alive and kicking :) Once the applesauce and peaches are over, I really do hope to get back to blogging more frequently. And maybe once in a while, like tonight, I'll just sit down and peck out something while I wait for the canner to finish.