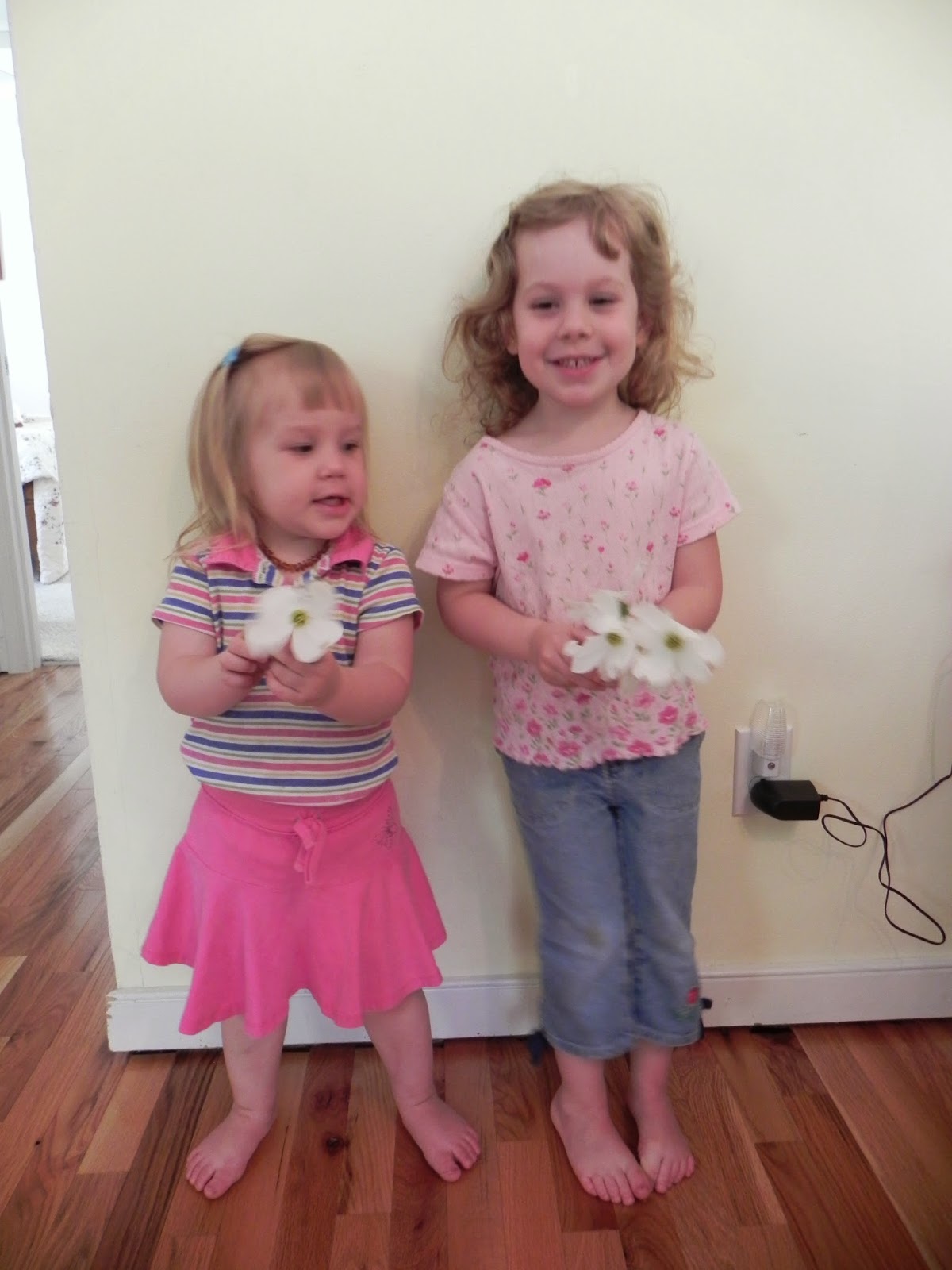 One Saturday the girls - with Daniel's help - picked me some bouquets of  dogwood blooms. We put them in a vase on the table and enjoyed them for a long time. "Long time" as in... ahem, I just threw out the dead twigs and dried petals yesterday. ;)


Susannah has a very creative imagination these days. That may be an understatement; I'm not sure. She also doesn't have much of a filter between her mind and tongue so I get to hear just about every thought that passes through her brain. It makes for quite the entertainment sometimes, and very tired ears others. Most consistently, though, has been her imaginary kids/friends, Iryn (pronounced "eye-rin") and Hepsabah. She has conversations with them and talks about them as if they are real people. Most of the time when we go somewhere, at some point on the way to where we're going she'll say "Oh! We forgot Iryn and Hepsabah!" I'll respond by saying "well, tell them to come hop in!" She'll move her arms around and then say "They jumped in!" and then she'll verbalize how and where they are sitting in the car and so forth. Sometimes she'll say "Where's [either Iryn or Hepsabah]? ... oh, he's being silly and running beside the car! He needs to jump in!"

Last week she was outside playing, and I heard her come in the back door doing her best fake wailing. I asked what the matter was, assuming that Sylvia had done something she didn't like or some such aggravation. She continued with her fake emotions and said "Iryn died!!" I quizzed her about Iryn's death, and she said he had died because his body got old (most of the time he is either 69 or 70 years old, even though he's her "boy"). She put on some very good fake sadness over his death. About an hour later I asked if Iryn was still dead, just in case he had miraculously resurrected. She was again sad and said that he was still dead; he had died because he had a "sore froat".

A few days later Iryn came back to life and is a regular part of her imaginary play again. :)


Susannah and Sylvia asked me to spread their blankets out
so they could join Charity in having some blanket-time. 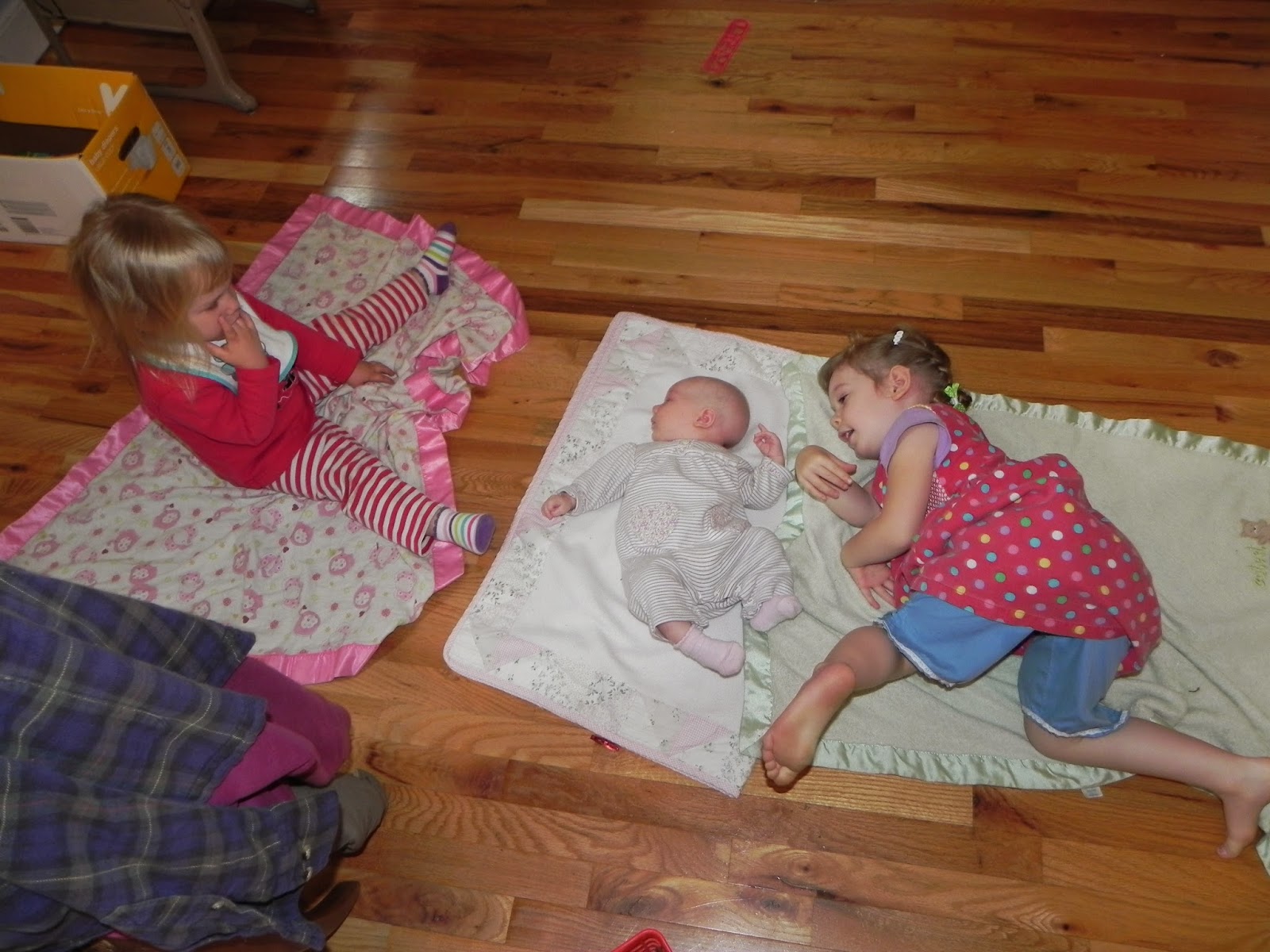 A "best friends" moment on a day when there were plenty of NOT-best-friends moments. ;)
(Sylvia is saying "cheese!" with a mouth-full of food.) 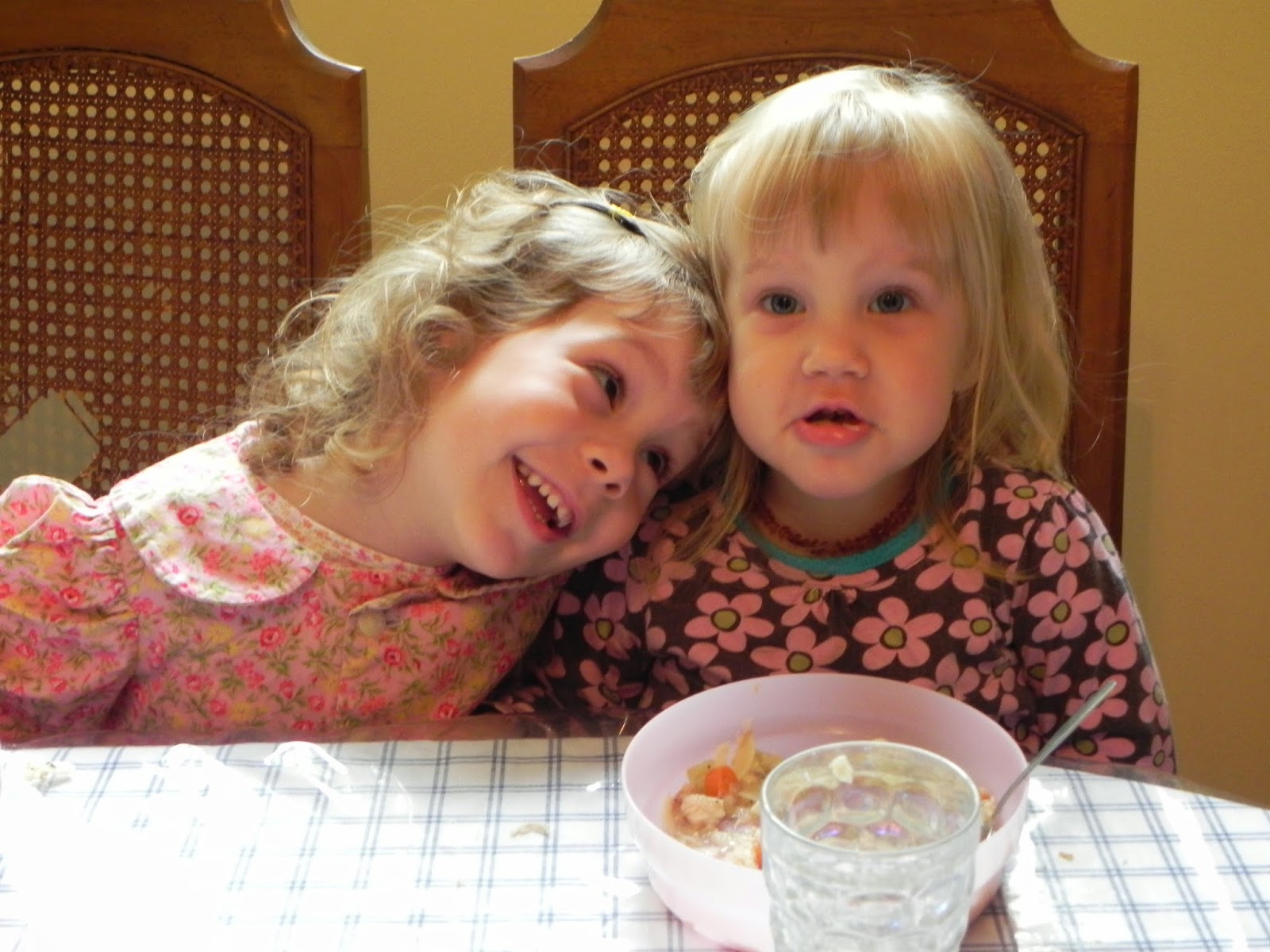 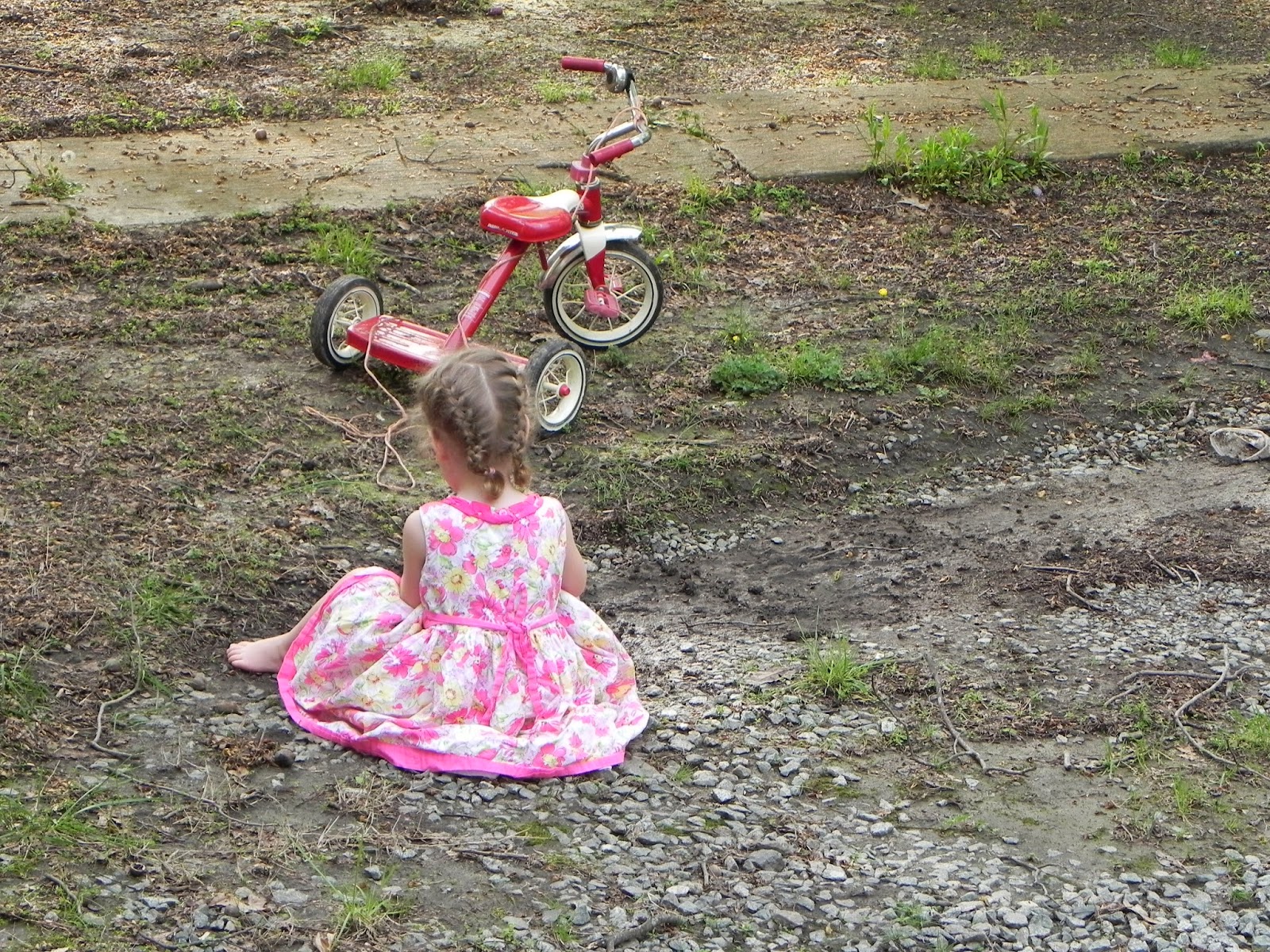 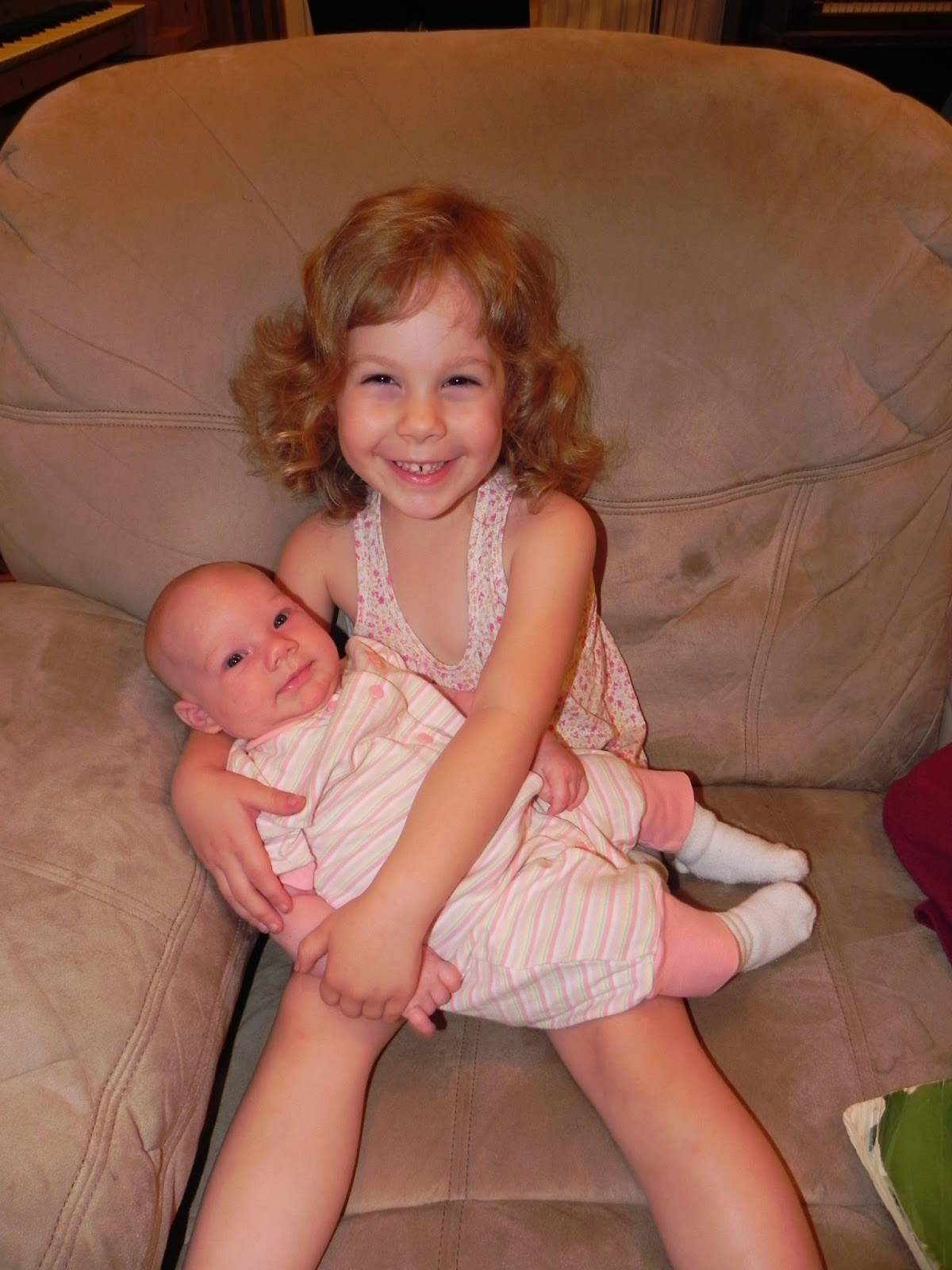 The girls love to hold Charity. 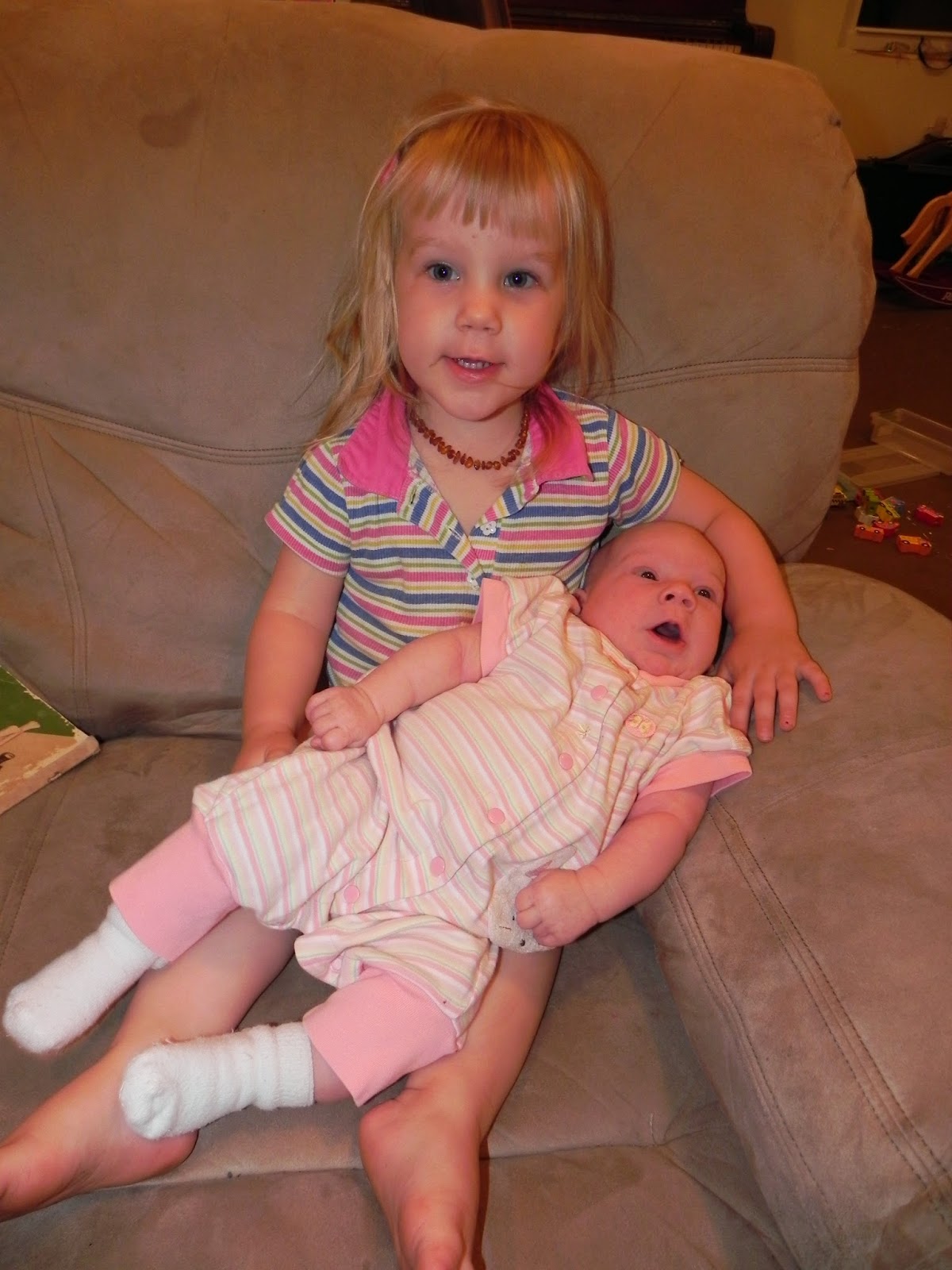 My mom has been coming for a day a few times a month and my brother, Glen, came along the last time. Susannah and Sylvia loved having him here! 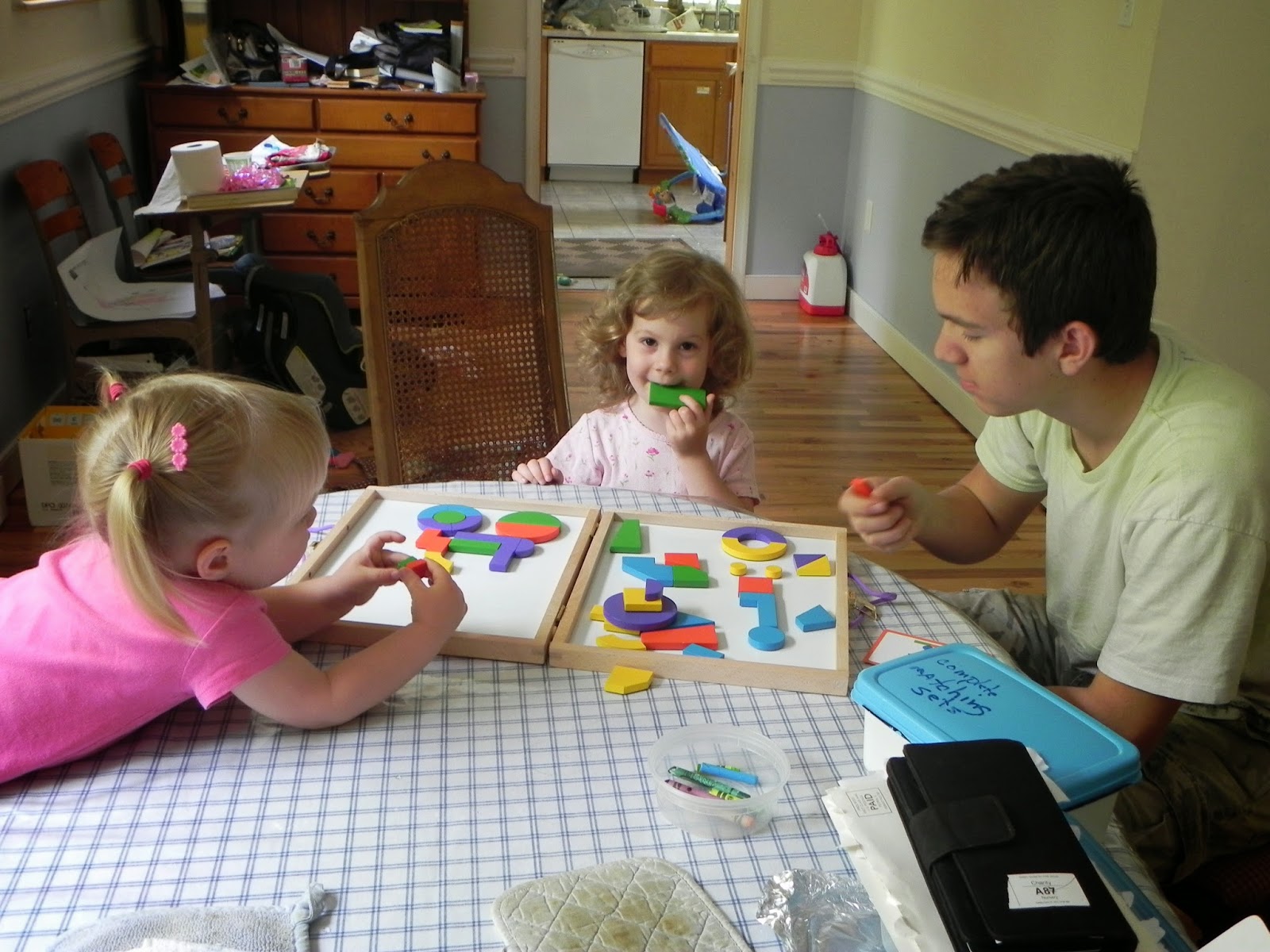 The Season of Worms. Ew. Gross. Creepy-Crawly. I don't remember what kind of worm it is, but EVERY spring here where I live, for a couple of weeks these worms are EVERYWHERE. They strip full-grown trees of their leaves, spin their long single-strand webs everywhere, and during the peak of their "season" it looks like the trees are raining worms because hundreds of worms dangle from their web-strings beneath the trees.

That was the preface to these next two pictures (you're welcome ;-) ). One afternoon Susannah came in really happy and excited. I quickly realized she was so happy and talkative about her WORMS! She had 3 worms on her hand and was talk about them, to them, and showing them to me. I was about to crawl out of my skin but she was loving it!! 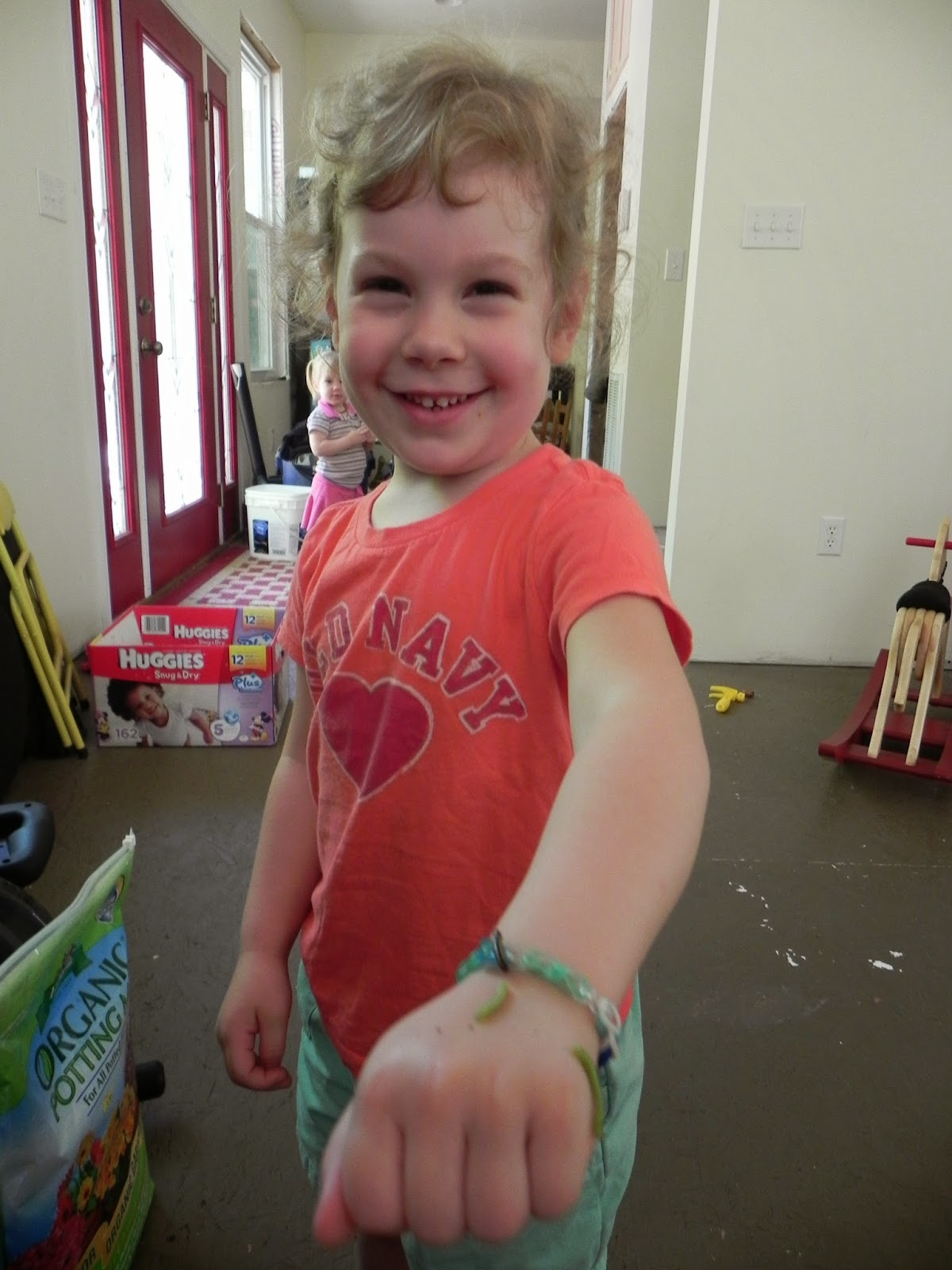 When one started to fall off, she would talk to it and gently reposition the wormy so he could stay on her hand. **spine shiver** Anyway, I'm just glad she didn't try to convince me to let her keep them in her bed like she asked about doing with an earthworm a year ago...  I guess she still enjoys her wildlife. 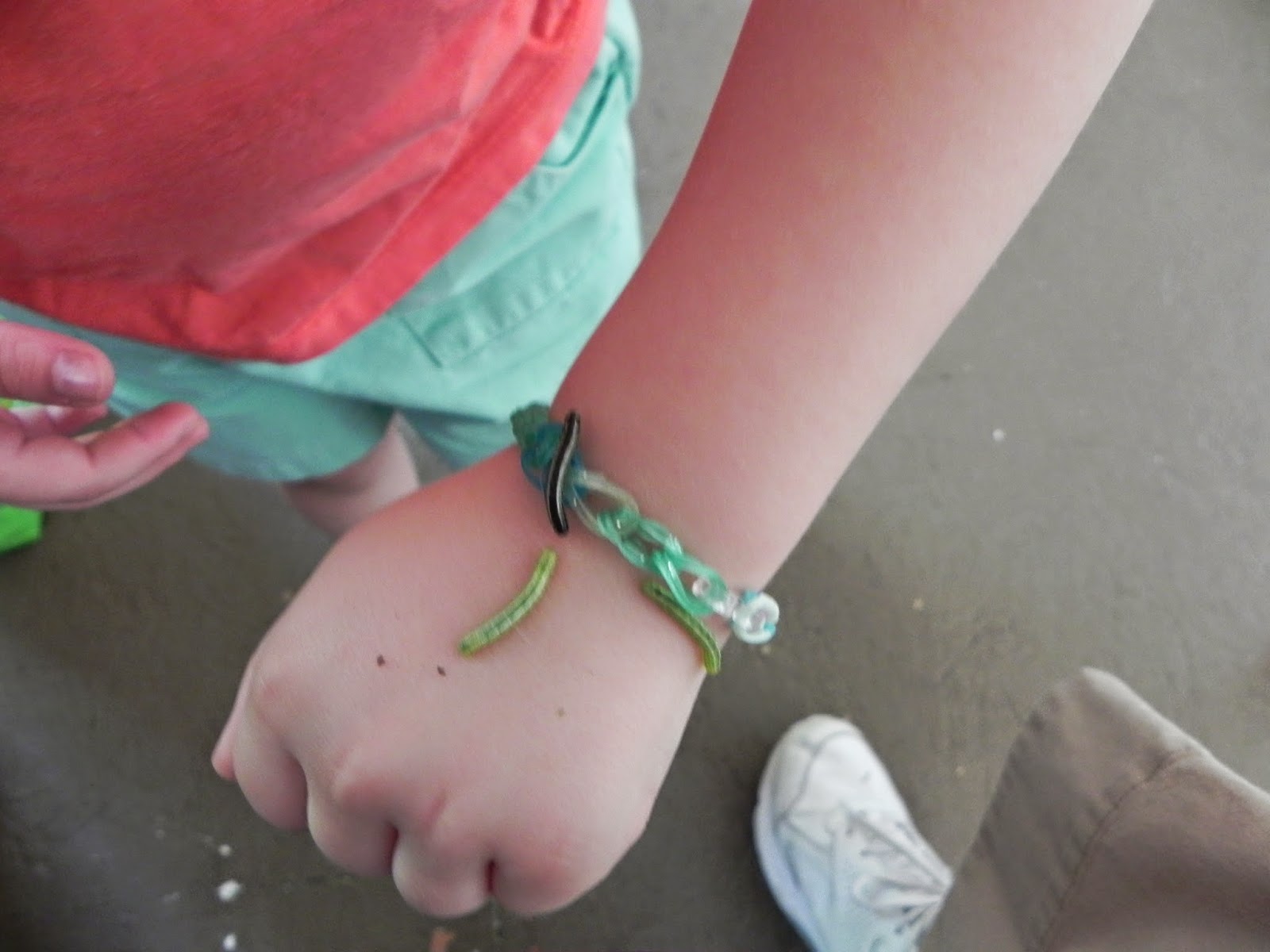 Since Daniel's work has picked up with a bang, the girls clamor for time spent with him when he's home. I encourage it, too, because it makes a big difference in their behavior when they get some Daddy-time... and it gives me a little respite as well. Win-win. Anyway, Sunday afternoons between lunch and naps are one such time. They like to play a game, wrestle, read books or just have good fun together. Sylvia isn't quite able to play board games yet so she usually watches while she climbs all over Daniel. :-) 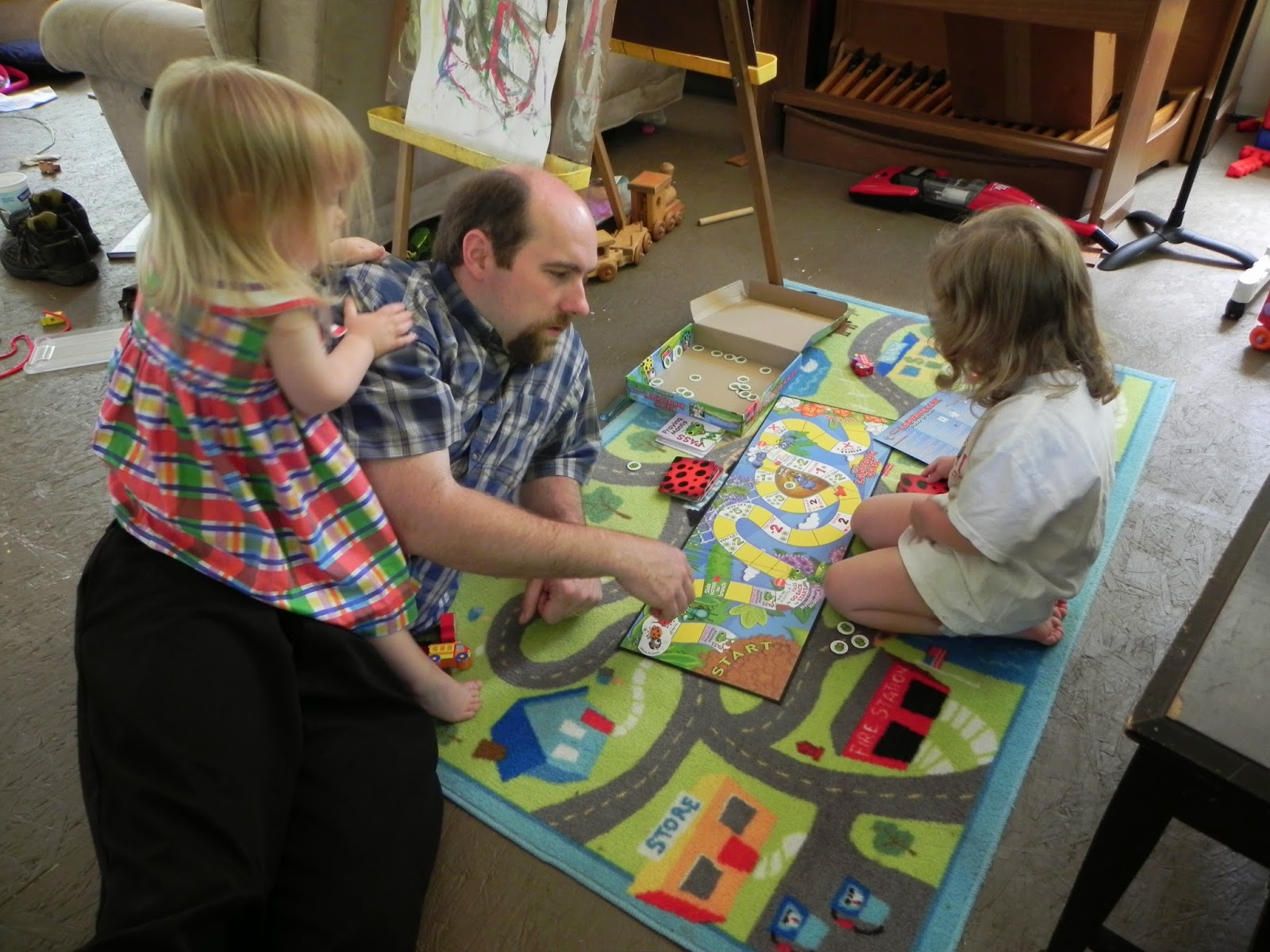 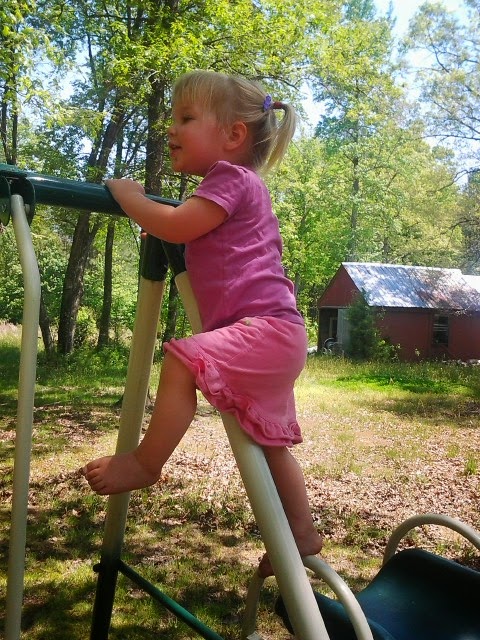 These monkeys have pigtails and are named Susannah and Sylvia. :-)  With today being warm (around 90°) it is a good day to get lots of fresh {pollen-laden!} air, sunshine and exercise. During one of Charity's naps I went outside and pushed the girls on the swings for a while before they moved on to "monkeying".

Sylvia is still finding her Monkey-footing and Monkey-grip so I stayed close to her as she wanted to do everything her bigger, more experienced-at-monkeying sister did. Many times I heard "Wook, Mama, wook!!" as she climbed and hung and practiced. 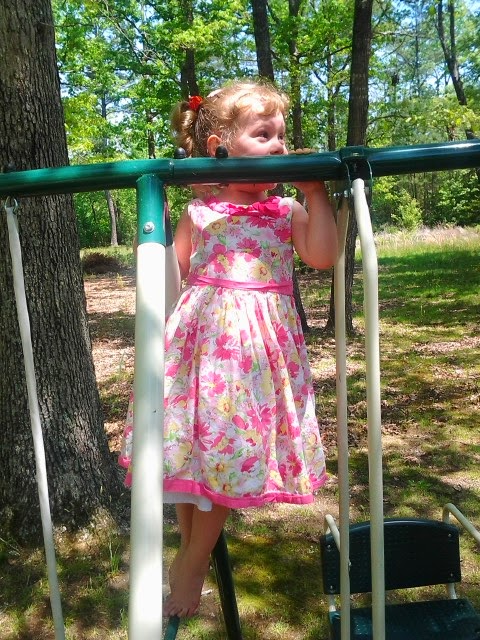 Susannah has been monkeying for 2 years now so she's more advanced and is learning the art of free hanging and then regaining her footing.  A few days ago she had a minor mishap but was certain she was dying. I explained to her that "monkeying" involves risk, and if she was going to climb and hang she was also going to possibly fall sometimes. She said "ok!" and climbed right back up to where she had fallen from. :-) 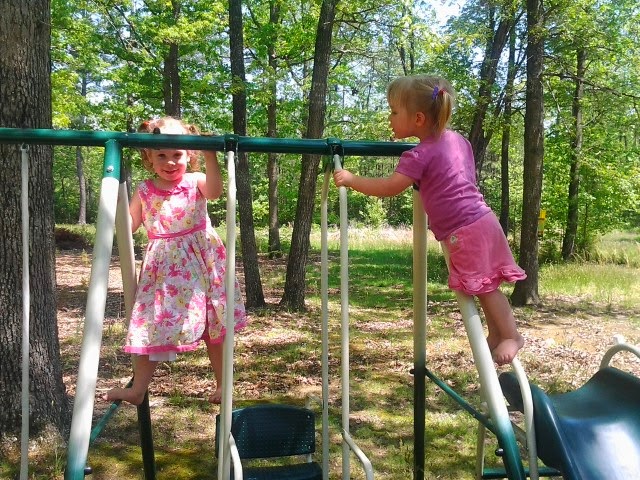 My parents gave us this swing-set a few years ago and I really enjoy having it. It is a place for my kids to expel energy as they fly up to the sky on the swings, strengthen muscles and core balance as they "monkey" and probably most challenging, learning how to share and take turns. 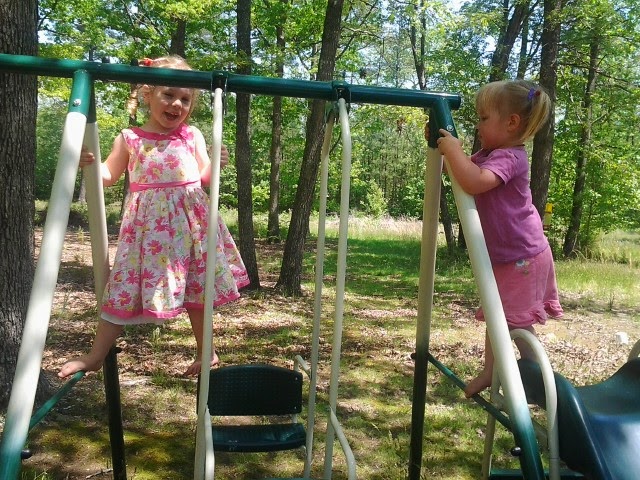