Here is the 13 week picture from babycenter.com that shows week-by-week (approximately) what babies look like. 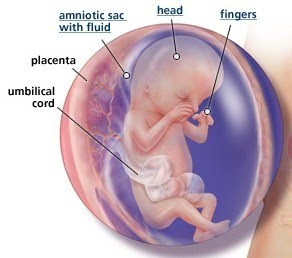 Here how our baby is growing! Fingerprints have formed, veins and organs are still visible through the nearly translucent skin, and the body is starting to catch up with the head, which makes up about 1/3 of the baby's size (up until now the head has made up about 1/2 of the baby's size!). If we're having a girl, she already has 2 million eggs in her ovaries (wow!), and Baby George is almost 3 inches long and weighs about an ounce.

From past weeks, I know that George (our nickname, we don't know if it's a boy or girl) is kicking/moving up a storm in there, though I can't feel it yet. He can open and close his hands and squint his eyes (which aren't open yet). He is also swallowing and pretty soon will start peeing!

Wow, it is so hard to believe that by this time 7 days from now, I will be in the 2nd trimester! Time has flown past so far! Not that I mind :) I don't have any picture to show you, but my 2nd appointment is Friday morning and I hope to take one then. Daniel took one the day of my first appointment, but I wasn't showing any then. I don't know how much I'm "showing" as much as I'm in the "look fat" stage. My stomach is certainly bigger than it was before! I must not be looking too pregnant because at a picnic on Saturday one of Daniel's cousins didn't know I was pregnant until we told him.
My clothes are fitting differently. I have 1 pair of elastic waist shorts and 1 pair of capris that I wear all the time. The shorts I have to roll the waist band down so it's not right over my stomach. For some reason I can't stand things being snug on my belly. I don't know if it's still a morning sickness thing or if it's just being pregnant. The capris, well, I've done what probably some of you have done. I have taken an elastic hair tie and I'm using it as an extender! They are baggy on me that way, but it provides enough "give" that they aren't snug. I do have 2 bags of clothes from someone that I need to go through and see if anything fits, and other people have told me they have clothes for me.
I would say that I'm basically over morning sickness. I am definitely to the "I'm hungry and I'm hungry NOW" stage. I eat the biggest in the evening, still, since that's when I get the most hungry. Baked potatoes are still a huge "go-to" thing for me, usually at least one a day. My stomach still doesn't like large amounts of liquids at a time, though, which gets old when I'm thirsty and want to down a whole glass of water and be satisfied. I made the mistake of forgetting on Monday and drank almost a whole glass of water with a snack. Soon after I had my first throw-up. Yuck. I try to drink little amounts often, I haven't dried up and blown away, and I'm still peeing, so I guess I'm getting enough, but there are plenty of times I would really like to drink much more! It seems like I can drink more in the evenings, so I usually do... and that results in having to climb out of bed at some point in the night to go visit the bathroom.
Posted by Miriam at 7:36 AM

This is so exciting! I remember all these stages, and marvelling at the little one growing inside. Enjoy it! Sorry about the drinking thing. Maybe that will end soon too.

When I was pregnant I hated to have pants/shorts/underwear covering my stomach!! I never did wear maternity underwear - yuck!!

I remember being there. It will be over before you know it! Have fun with it!

Congratulations on your little blessing! You are going to be a great Mommy!
Dont listen to all the unwanted advice, listen to your body!
With all 5 of mine I could not stand anything snug on my tummy after 6 weeks!