I had been working at getting gifts wrapped here and there, but still ended up with quite a bit to do when Christmas Eve rolled around (somehow rehearsals for 2 Christmas concerts ate up a TON of time and energy!).  I considered throwing each girls' stuff into a big box and only wrapping 1 box for each of them, but um, hello, that is SO not nearly as fun as opening multiple gifts!!


I caught Susannah just sitting and
looking at the tree and gifts for a few
minutes one afternoon. 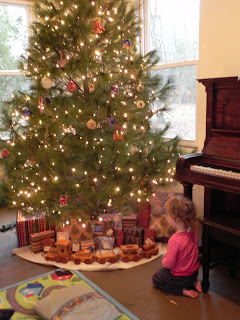 Our gifts were pretty simple this year (as they have been), but it was a lot of little items.  I think I went to bed around 3:30 Christmas morning.  I could've finished sooner, but I wanted the gifts to look nice.  I will confess to spending probably 30 minutes arranging and re-arranging the gifts under the tree in the middle of the night, because I wanted it to look pretty in the morning. :)


Middle of the night before Christmas. 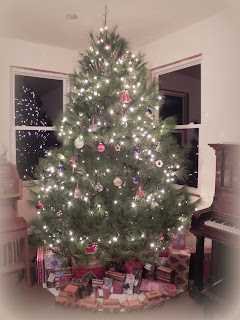 This year I got to put out a wooden train that I snagged for just a few dollars a couple years ago.  A few of the wheels are broken off, but I think it looks fabulous under the tree. :) 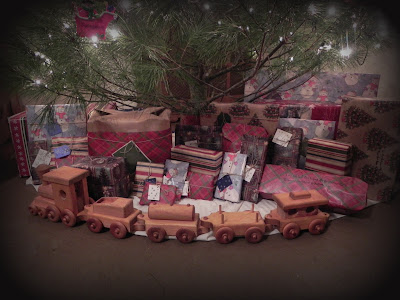 I, of course, did not burst out of bed at the crack of dawn.  Susannah woke up first (around 8, I think?) and we got up and ate Cheerios for breakfast if I remember right.  Then we knew that if the day was going to go like it needed to, we had to get on with the gifts... what a shame. ;)

Sylvia got some new tights, 2 puzzles (that I took out of a puzzle rack that was a gift to both girls), and some rattle-y balls and turtles. 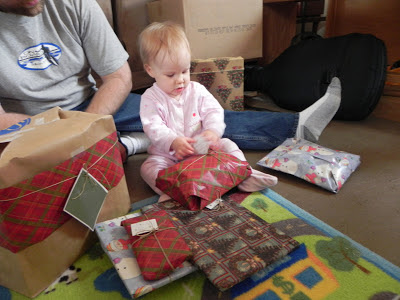 Back in the fall, a friend was cleaning out her attic and offered us a child's easel.  It is nothing super-fancy, but it allowed us to give Susannah a really "great" Christmas gift for nothing.  I had actually been considering finding one used, but I hadn't fully decided.  To go along with it, we gave her "art" supplies: paint, brushes, (short, fat) colored pencils (because she likes to break her crayons in half), a huge pad of paper, a huge binder clip to hold the paper to the easel, some window crayons, a small pad of stickers and some (needed) barrettes.  It was a lot of little gifts but did not cost very much. 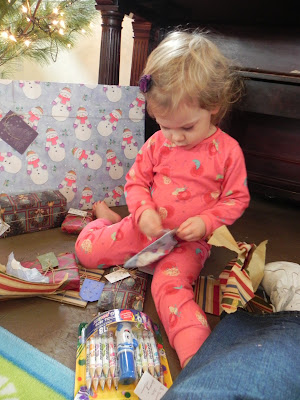 After we opened our gifts, Sylvia went down for her morning nap and I started tearing around like a chicken with it's head cut off.  See... as soon as we could get left after lunch, we were leaving for a week.  First we were heading to the beach for a few days with Daniel's family, then heading to my parents' farm for a few days.  Susannah and Sylvia had a simple lunch, and Daniel and I snacked on the traditional Christmas Day shrimp ring and other munchies while we packed.  I was running on coffee, adrenaline and will-power.  About 2:30 both girls were getting fussy for their naps.  We loaded them into the car (it was not cold outside) and they both fell asleep while we finished packing.  We pulled out about 3:30, I think, and they slept most of the way. 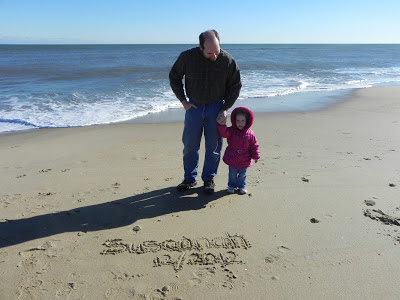 More on this un-vacationy-vacation later. :)
Posted by Miriam at 3:25 PM

Awwww...sounds like you were doing a LOT! I really hope you slept on that ride too. I've been through New Year's or Christmas's like that. After a couple of those, I really pruned my Dec. calender! Not saying you have anything less to prune, sometimes it's just the timing of things more than the multitude of things. This year, our timing of things worked out perfectly. That was a first and it was great!
I'm looking forward to more installments!