We made the switch to all wireless phones to save about $40-$50 a month. When we first moved here we had terrible cell phone service in the house, but then they put a tower in just a mile or two from here and now we have service all the time. Plus most of the people I talk to most frequently are "in" so I won't be using minutes most of the time :) Moving to wireless meant that yesterday we were without Internet while everything was straightened out. I didn't realize how much I rely on the Internet for social interaction! Maybe I need to unplug every once in a while.

Our camera bit the dirt, er, sand. Somehow I had a little bit of sand in my coat pocket, and when I put the camera in my coat pocket the two mixed. Sand got down in the lens cracks. Not good. Daniel tried to get it out. I tried to vacuum it out. Daniel tried to take the camera apart but that wasn't working. We started to consider our options: Getting the camera fixed vs. buying a new one. Monday I spent a large portion of the afternoon finding local places that even repair cameras, and then getting estimates. Estimates were at least 1/2 of what we paid for the camera 6 years ago and would take several weeks, so we decided to replace. More time on the Internet :) Say hello to my new friend: 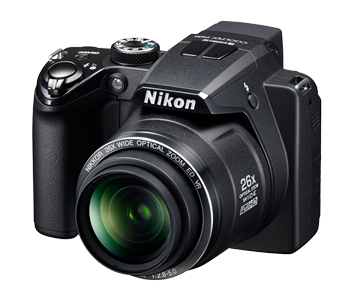 Photo Source
A Nikon Coolpix P100. I have been longing and desiring for a Nikon DSLR 300, but spending that much wasn't prudent or wise at this time. So we went middle of the road. And we discussed what dollar amount we would spend BEFORE we decided. This one has more bells and whistles than our old camera, and already I'm liking what I've figured out so far. I have a LOT of reading, experimenting, learning and practicing to do, but somehow I don't think I'll mind :) (And this camera came with a lens cap - no more sand accidents!)

Monday late afternoon I heard teeny, tiny mewing coming from Susannah's room. Uh-oh. Did she really?! She didn't. She did. She did?? She did!! Our mama cat, Chubby, had her 5 little kittens underneath Susannah's dresser. We knew she was about ready to pop, but Daniel was guessing later this week. I highly suspected that she was going to do her best to have them indoors, but I really hoped she would find a nice cozy place down in our shed or in the carport that she liked better. Haha, the joke's on me! 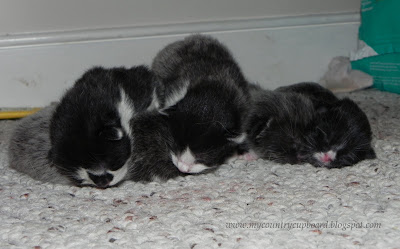 Less than 24 hrs. old
The fun thing is that they are right in Susannah's line of sight when she's (awake) in her crib. The amazing thing is Chubby's dedication to her babies! She did not leave them once from the time they were born (Mon. afternoon) until Tuesday morning. And that was to run outside quick, get a bite to eat and then she went back to them. Now she'll go outside for a little longer, but when she comes back in, she RUNS into Susannah's room to her babies. I feel a little badly that we will be getting her "fixed" after the kittens are weaned - she's such a good mama cat! - but we can't keep running a baby factory.

On the laundry front, except for cloth diapers, we've entered the season of drying all the clothes in the dryer. Daniel's allergies are starting up already. He sneezed probably 10 times this morning. On the cloth diaper front, I'm getting along pretty good, I think! I figured out that I need to change Susannah a little more often, but aside from the 1st major flood, we haven't experienced any leaks. I only have enough diapers for 2 1/2 days, though, so I think I'll be getting some more.

And that's all the "exciting" stuff that's been going on lately :) Time has flown by this morning and while the laundry has been going, I haven't gotten very far with other stuff. Gotta keep movin'!
Posted by Miriam at 8:52 AM

The same thing happened to my camera. Only it was at the beach...yes I know! But how am I supposed to get pictures of the kids at the beach without a camera??? Anyway, I picked up a little camera at Best Buy for about $200 and it's been working fine. Wish I could get one of your kittens...we love cats!

Second- those kittens are SO CUTE! I have a feeling we will have our own litter soon...

Third- I cant wait for the weather to warm up so we can dry our clothes out on the line. One of my favorite things!!! :) Hopefully allergy season wont last too long, I have the sneezes, too.

its waining puddy tats at your house!!!!! Julia