Back in October when we were moving into our new living room (which we really did not have any furniture for, aside from our piano and love-seat), we were given a bunch of furniture including bookshelves.  Be still, my heart!!  To not have to use diaper boxes on their sides to hold the girls' books?!?! Pure bliss!  From time to time, Sylvia can be found pouring over books as she pulls them out and looks at them (and frequently chews on them). 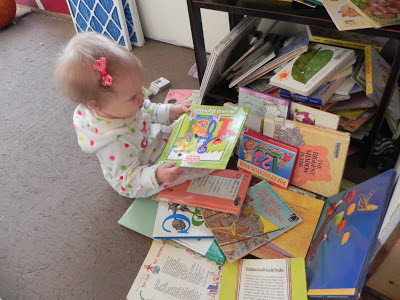 A few weeks ago, we were having mouse problems.  Mousie was quite talented and stole the bait from a regular trap twice before deciding it was too risky to even approach the trap.  I finally resorted to glue traps, under the stove.  Last week we caught another "mouse"... this one was very cute, brown-eyed and pig-tailed. :)  She was looking for toys under the stove and instead found the glue trap.  Not knowing what it was, she ended up stuck... and then more stuck as she tried to get un-stuck! 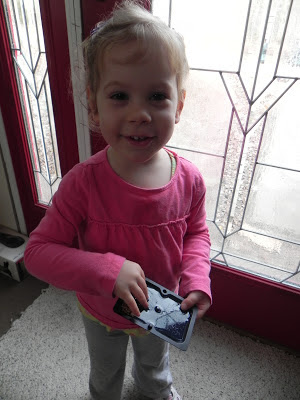 During Susannah's bedtime routine, I noticed something amiss with her bedside lamp.  I thought Daniel had been silly, but when I asked him about it, he said he didn't do it.  When I asked Susannah about it, she got a silly grin on her face and said she'd done it.  Can you figure it out? 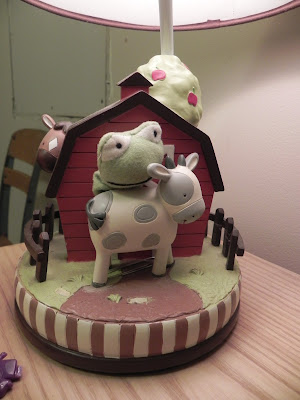 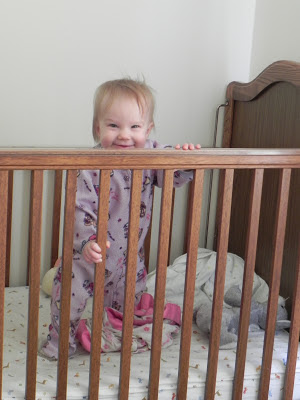 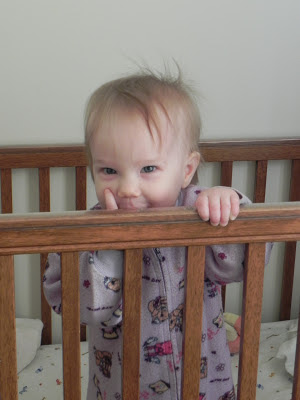 Oh those babies are so precious!

Sylvia's hair is getting so long!

How funny that Susannah got stuck in the sticky trap!

Was it the frog on the lamp? There is a picture on my blog today of what Lily did to her lamp....little girls and their lamps :)

I can't believe how big Sylvia is getting!

I loved this! They are so cute.

I like this mousey so much better than the rest!!!! I am also glad it was a sticky trap, imagine those sweet little fingers finding a reg trap!!! I think it was Sally or Rachel that found a trap with their toes one time on the cellar steps!
Julia