Sunday was Susannah's 4 month birthday, and yesterday she was 18 weeks old. It is so hard to imagine!! She was such an itty bitty bundle that slept all.the.time, who had me convinced I was going to get gray hair, false teeth and grow feeble from old age before she was finished nursing for a feeding.

I guess it was about 3 weeks ago the switch flipped and she's usually done eating in 10-15 minutes. I can like this :)

Her hand-eye coordination is getting better each day. She loves to reach out and explore anything dangling; she hasn't started to reach out while she's on her tummy yet. She also rolls over from back to front quite easily and without complaining as of this week. Now she just complains trying to get rolled back onto her back!

Her sitting up muscles and neck muscles are strong enough now that she can sit in her Bumbo seat pretty well. She can't do it for a long length of time, but she doesn't flop over anymore :) 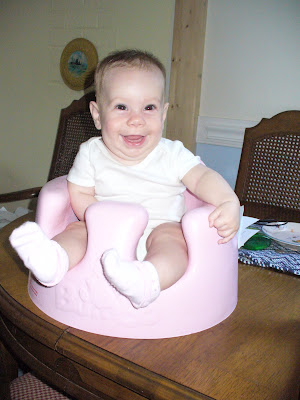 She loves her Daddy!! She's almost a fast with a grin for him as she is for me, and Daniel sure does love it :) 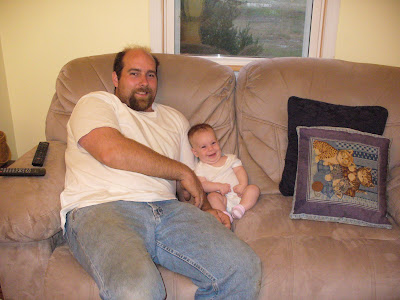 In the last week or so she started waking early out of her naps. Most of the time she wouldn't fully wake up and would go back to sleep if I gave her her paci... then once last week and twice this week she woke up in the middle of the night. Twice she went back to sleep and once she did not - she was hungry. Putting all of those together we decided it was time to start her on Rice Cereal :) 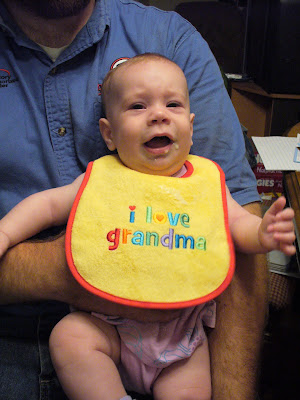 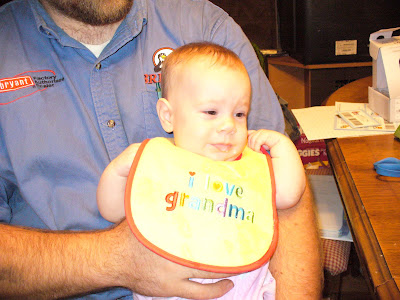 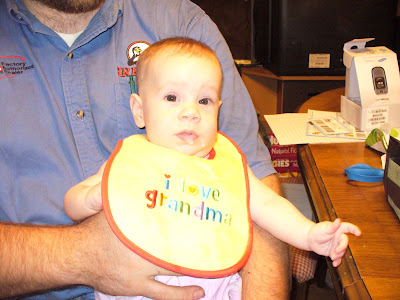 Last night was her first taste of it :) She did not like it!! She fussed and fussed but we managed to get some in her (we think, anyway). But... she slept straight through the night, and didn't wake up until 7:30 this morning. Ahhh :) This evening after her last feeding I mixed up about 1 Tbsp. again and she still didn't like it, but she didn't fuss this time, and she ate everything that didn't get on her face :) Now I just get to look forwards to her first "solid food" poopy diaper! Haha!!
And so a new adventure in parenthood begins :)
Posted by Miriam at 11:55 PM

I LOVE reading about all of these firsts from a first time mommy's point of view! Thanks for sharing!

Wow, she's growing so fast! Time really flies by when you have little ones. My daughter got constipated on cereal and we started mixing it with 100% prune juice. She LOVED it and it kept her from getting stopped up :)

It wasn't until a few months ago I knew what a Bumbo was, and ever since I've been curious. Do you like it??

@Phoebe - I think I'll like it :) She's not quite big enough to sit in it for a length of time (she gets slumped over and can't get herself back up right now), but I'm thinking that it will be great as her highchair for a while until she fits the bigger one that we have (that's for a baby that can sit on it's own). It also comes with a tray (we have it) and I'm thinking that will be great used as the highchair AND a good surface for toys if I need to her be in it and just playing. I'll let you know if there's anything I specifically do or don't like :) I think the thing I like the best is that they aren't supposed to be able to tip it over or fall out of it. I'm sure if an older baby got to rockin' in it they could tip or get out of it but that's probably too old for it by that time :P