Our Life in Pictures

Wow, I feel like it's been forever since I've written a blog post!  I don't want too much time to pass without writing down some memories and sharing some photos, so this is a quick, photo-filled post.

Sylvia is loving her play-mat lately.  I think the other day she realized she has feet... or maybe just that feet appear every once in a while. :)  She been trying to grab them lately. 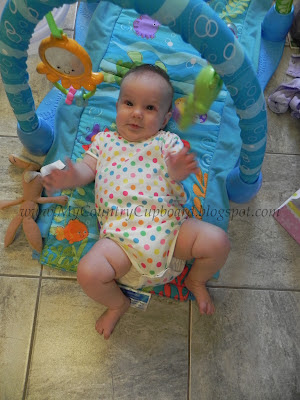 Susannah was having room-time one day, and while it's not unusual for her to be quiet (usually coloring) for a part of those 30 minutes, on this day I thought it was just TOO quiet.  I peeked in to find her slathering herself with diaper cream!  She had opened one of her dresser drawers (which she is not supposed to do) and found a tube.  I was glad that she mostly had it on her skin where I could wash it off fairly easily.  She thought it was exciting! 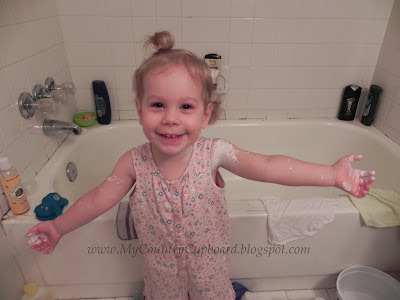 A few weeks ago when Daniel was gone ALL. DAY. LONG. every day of the week (he was on call) and Susannah and I were both getting antsy from not seeing Daddy, I introduced her to markers (washable!!).  She LOVES her markers!  She does pretty good about not getting them on her clothes or writing on her skin.  I just have to go behind her and recap them after she's finished since she can't quite get the lids back on them yet.  She loves to draw "grass" (zig-zags), "water" and "rainbows".  Ovals are also something she draws a lot of, and generally she does pretty well getting the oval shape accomplished. :-) 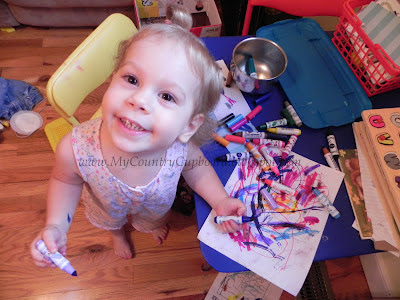 Sylvia is just as cute as ever.  This is how she sucks her fingers much of the time.  A friend at church made this blanket for Sylvia (it has pink elephants on it) and it is my favorite blanket of Sylvia's.  I'm hoping that if she has a favorite blanket it will be this one. 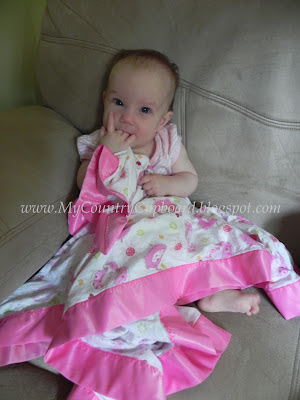 A day or two after the huge dorecho storm that swept the east coast two weekends ago, we had another smaller storm come through.  It dumped the largest hail I've seen here yet for about 5 minutes.  (By the way, we did not have any damage or lose power from the dorecho, though many friends and family throughout the state had quite a bit of damage.) 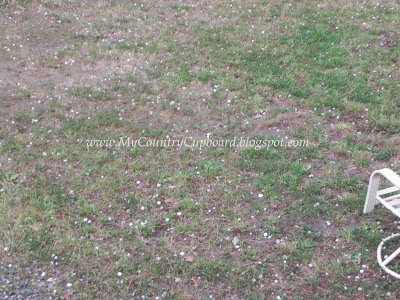 Daniel went out and brought a few hailstones inside.  It was neat to see the layers in the largest one (on the right). 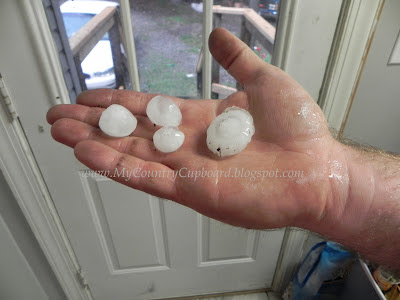 July 4th!!  The previous week we had barely seen Daniel at all, so we were happy for a relaxing day with ALL of us home, together.  That evening we took Susannah and Sylvia to their first fireworks show. 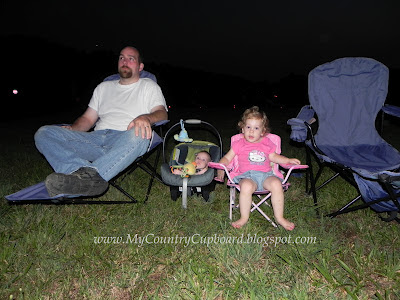 Susannah wanted to walk around or sit in my lap most of the show, seemingly not really interested in the fireworks after the first 5 minutes.  Then after they were over she was begging and begging for "more sparky red?" and all but crying when she had to get in the car to come home. 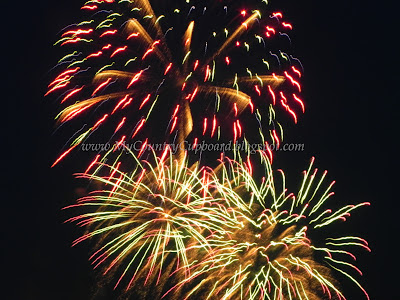 Susannah has been interacting more with Sylvia lately, and it is fun to watch them together. :) 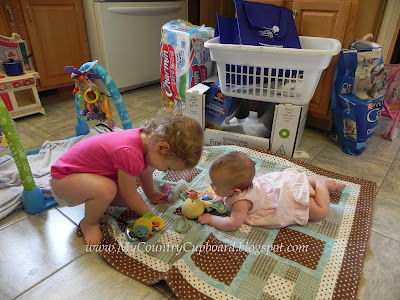 The past few weeks held some blazing hot temperatures for us.  While this thermometer is probably a degree or two off, this shows that it really was very, very hot.  I looked a the thermostat and saw "104" and decided to grab the camera.  While I was getting the camera it bumped up to 105, then 106.  While I was taking pictures it went up to 107 for a few seconds, but I missed that.  Then it dropped back down to 106, then 105.  HOT.  Laundry dried quickly those days!!  The only reason I went outside on those days was to hang the laundry, and only to do that because I couldn't bear the thought of heating up the house with running the dryer! 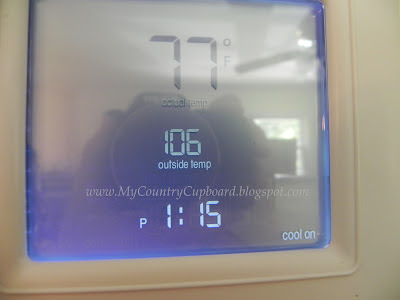 Tired of being cooped up in the house, I made a little pool for Susannah to ply in under a shade tree.  She loved it!  I wished I could fit in one, too. :-) She played with her bath-tub toys, most often making soup, or mayonnaise, stirring it 'round and 'round with her spoon (or "stoom" as she still says).  She would say "stirt up!"  :-) 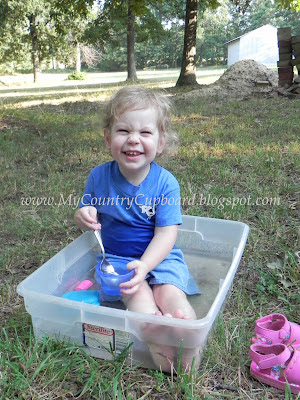 And that's a little peek into our past few weeks of life.  :-)  I hope to get some more posts up before too long.  Really.
Posted by Miriam at 2:33 PM

Cute pictures! Markers are banned in our house right now. Derek decided to color our counters and it took a lot of work to scrub it off (Chris thinks he can still see it).

@Megan Clark Yikes! Can you bleach the countertops? I've taken sharpie off my (light colored) countertops with a strong bleach/water solution. Susannah is only allowed to use her markers on her play table in the L/Rm. Doesn't mean she'll never venture to another are of the house, or won't ever use them in the wrong way, but so far so good (with reminders :) ).

Loved seeing all the pictures of your adorable girls! That hail is crazy! Glad y'all didn't have power outages or damage from the storms!