Susannah just gets sweeter and sweeter every day! People often ask if we sing "Oh, Susannah (don't you cry for me)" to her, but I don't know that I've ever sung that to her. Instead I'll often sing "You Are My Sunshine" to her. 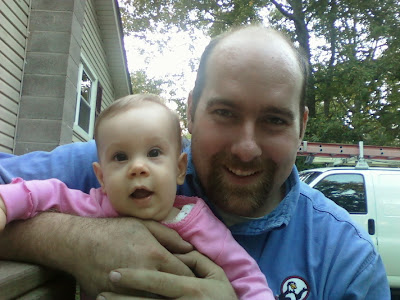 She pushes up on her arms now, and can scoot herself in a clockwise direction. But she hasn't figured out counterclockwise! Sometimes she gets frustrated when she wants to get to something to her left and can't get there :)

She's starting to figure out how to go forward in her walker. She doesn't do it very much yet, but she's done it a couple times. She still doesn't express interest in rolling around a whole lot (but she does roll back and forth in the same spot). 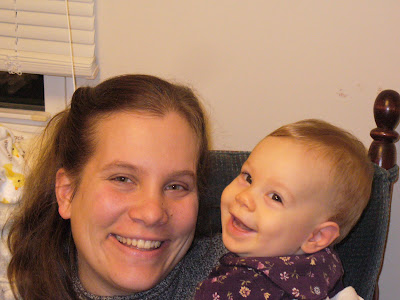 She nurses 4 times a day now, breakfast around 8am, lunch around noon, supper between 5 & 6, and then her night-time feeding usually between 9 & 9:30, sometimes as late as 10pm. She takes about a 2 hour nap in the mornings, a 3+ hour nap in the afternoons, and then a short nap in the evenings. At some point I probably just need to nurse her before putting her down for her evening "nap" and just move her bedtime to that time.

She gets a solids meal with breakfast, lunch and supper. She eats baby oatmeal cereal (which I'm starting to supplement with some quick oats), rice (cooked to smithereens and then run through the blender with extra water), mashed potatoes, corn, peas, carrots, sweet potatoes, green beans, peaches, pears, applesauce and bananas. She likes bread, too, if we tear off tiny pieces and put them in her mouth for her. She is VERY interested in all things FOOD right now, and if we're eating and she's not, she wants to be eating, too!! 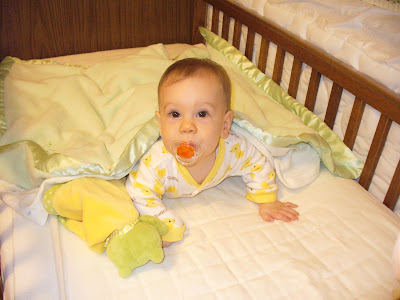 She is also becoming more verbal in expressing her displeasure. Sometimes I can't get her solid food ready fast enough and she fusses in her chair while she waits!! She is still a pretty happy baby overall, though.

She still can't sit on her own yet. She doesn't need much support to sit up, but with none she either ends up folded in half or toppled over to one side or to the back. She loves cats. We have a few that we let into the house sometimes and if she is on the floor, her eyes are on.the.cats. She loves to pet them but they aren't too keen on her petting style :) I think if anything will motivate her to scooting/crawling it will be the cats.

She surprised us with 2 teeth a couple weeks ago! They came through about 1 1/2 weeks apart and she is so cute with her two little nubbins :) She has also figured out that she can put some things in her mouth and not hold it in with her hands. She gets the biggest grin on her face when she's got a sock or toy in her mouth and not holding it - kinda like "Look, ma, no hands!"

This week Daniel's grandma moved from Pa. to an assisted living home here in Va. She stayed with Daniel's parents during the move, and Susannah and I got to "Grandma-sit" Monday and Tuesday (Grandma has dementia so she can't be left alone). Grandma is now only about 20 minutes away from us, so I hope we can go visit her often. I don't think she'll ever realize exactly who Susannah is (as far as being her great-granddaughter), but I hope that with frequent visits we'll become familiar to her and that she'll enjoy watching Susannah grow up. And Susannah will get to know her :) 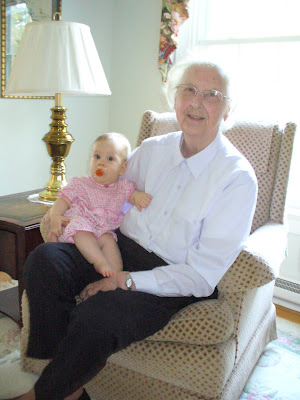 Oh, and she has finally started LAUGHING!! We knew she could laugh, because we'd gotten her to laugh just a few times, but now we can predictably tickle her and she'll actually laugh :) It is so fun to hear her giggles :)

It is hard to believe that she is already 7 months old. More than 1/2 way to the 1 year mark. I knew I was going to love being a mama, and I knew my life was going to change, but I didn't realize how much (for either one)!
Posted by Miriam at 10:43 AM

I just love that little button nose! Has it really been seven months already?!

I just stumbled upon your blog from liberal simplicity and I am really enjoying it! Your blog has a cute layout and I enjoy your style.

Thanks for sharing a piece of your life for others to enjoy.

I'm so glad you're loving motherhood and you have such a sweet baby girl for the journey! She's a doll baby.

I think I recognize that purple outfit (baby gap maybe?) all three of my girls wore that! Hm... I could be sad but seeing on your sweet little girl makes me smile. -Grace